Mapping the Distance to the Nearest Coastline

Recently, I stumbled upon a NASA dataset containing the distance to the nearest coastline. The data are a rather straightforward calculation based on input from GSHHG—the Global Self-consistent, Hierarchical, High-resolution Geography Database.

Provided as a convenient GeoTIFF, the coastline distances are available in 0.04° and 0.01° resolutions. This makes it ideal for quick exploration. Or a dive down geographic rabbit holes.

So that’s just what I did.

Using an intuitive color scheme and relief for emphasis, I mapped the coastline distances. 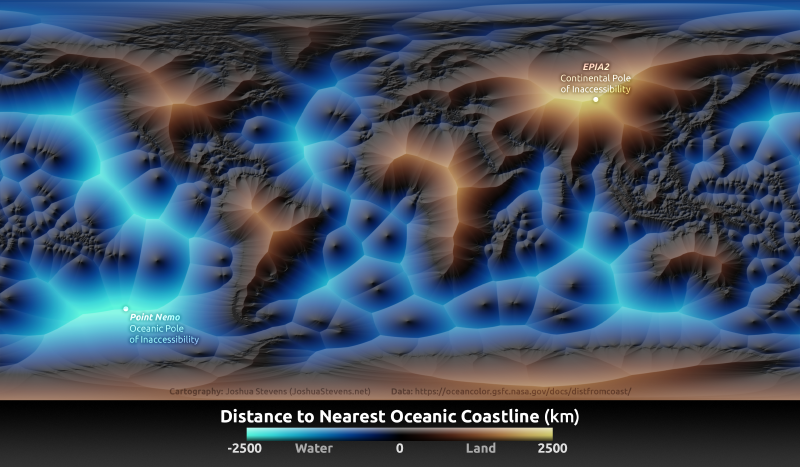 Ridgelines of remoteness separate one coast from the next. Central landmasses rise, while distant reaches of the sea descend into glowing fissures.

The remoteness of the eastern South Pacific is especially notable. These lonely waters are home to the South Pacific Gyre, a vast expanse of circulating currents. Within the South Pacific Gyre are the bluest and clearest waters in the ocean. And due to its remote location, this area is referred to as the Oceanic Pole of Inaccessibility. Emptiness and an endless horizon are all that can be found there. Almost.

Unfortunately, the currents of the South Pacific Gyre act like a black hole for debris and plastics, pulling them in without hope of escape. The amount of garbage amassed here covers an area larger than the state of Texas.

Most of the debris within this garbage patch drifted in without aim. But some items come crashing down here, hitting their mark with a sharpshooter’s accuracy. The target is “Point Nemo,” a location further from the coast than any other location on Earth. Rather than letting Earth’s gravity pull defunct spacecraft into a haphazard deorbit, many space debris receive a final flight plan: a controlled crash into Point Nemo. The remote location, with a lack of humans and low biodiversity, is ideal for minimizing risk.

One Pole, Two Pole, which is the True Pole?

Just as Point Nemo designates the oceanic point furthest from the coast, EPIA2—the Eurasian Pole of Inaccessibility (2)— is the continental counterpart. This is the furthest inland point from the coast.

As the name suggests, there are two Eurasian Poles of Inaccessibility—EPIA1 and EPIA2. Coastlines are no stranger to dispute. This is also the case for calculating distance from a coast. A paper published in the Scottish Geographical Journal proposes the two Eurasian Poles of Inaccessibility, based on the assumptions and errors involved in precisely calculating a coastline.

Prior to EPIA1 and EPIA2, calculations did not consider the Gulf of Ob part of the ocean. Doing so seems like the right call to me.

Note that none of these calculations consider inland coasts from lakes, nor the shores of large rivers. Factoring in these would shuffle things up quite a bit. And it would be a fun map to see! There could be many such maps, each derived from different rules for what is or is not a waterbody, how coasts are calculated, and at what scale geographical features should be resolved.

But that is rabbit hole, or a PhD in geodesy, for another day.