Graveyards of The Contiguous USA

Lately I have been challenging myself to read more fiction. The most recent book to be checked off my list is Stephen King’s Pet Sematary. A morbid and suffocatingly dark story, and one I had previously only known from seeing the 1989 film as a kid. (Yes, the book is better. By a long shot!)

It was the trailer for the upcoming 2019 remake that renewed my interest in Pet Semetary, those speeding trucks, and that burial ground beyond the deadfall. So I read the book, and finished it last week.

NACIS—the best cartography conference on the planet—also came to a close last week. The combination of cartographic energy and creepy books, in the midst of an approaching Halloween, meant only one thing: a creepy map.

The Geography of The Dead

Using data from OpenStreetMap, I compiled an inventory of 144,847 graveyards and cemeteries in the contiguous United States. Some were, to my surprise, even designated as pet cemeteries. 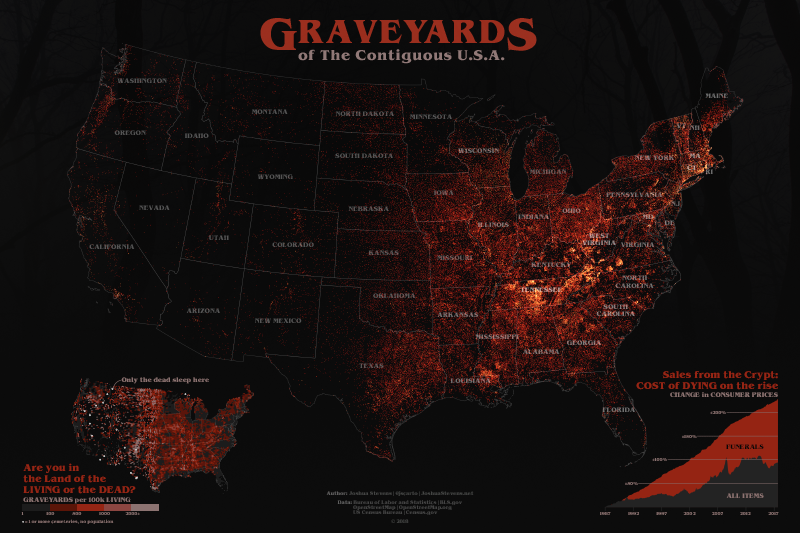 View larger. From the sparse graves of Nevada to a Tennessee peppered with cemetery plots, America is home to more than 144,000 graveyards and cemeteries.

Right away I was struck by the geography. The pattern, however, makes a great deal of sense in the context of American history. Some of the deadliest battles of the Revolutionary and Civil Wars took place in Georgia, Kentucky, Mississippi, New York, South Carolina, Tennessee, and Virginia.

Though it has explanations, the distinct separation between the geography of the dead and the living is fascinating to consider. We are separated from the dead by time, and with time comes space. As the center of our population slows its westward march toward equilibrium, I suspect the graveyards do the same… one plot of land and a typical lifespan at a time.

Some surprises emerged when briefly researching data on this topic. For instance, cremations have overtaken traditional burials for most U.S. states. This trend is expected to grow considerably in coming years. Partly because cremation is more affordable, and Americans are becoming less religious.

While Americans eye more affordable funerals, the cost of funerary services is on the rise. According to the Bureau of Labor and Statistics, funeral expenses have risen more than twice as fast as the average for all other commodities. Revenues for funeral homes are on an incline.

`Tis impossible to be sure of any thing but Death and Taxes.

As in life, so it is in death: we play our part and pay our dues. And it all happens in a geographically-rich proscenium of place.